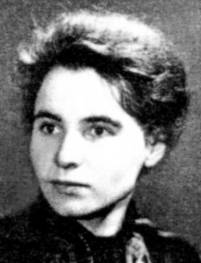 In 1958 Svitlychna graduated from the Department of Ukrainian Language and Literature of Kharkiv University. She worked in the city of Krasnodon in a school for working young people (as a teacher, then as the head teacher, and the Head of the school), and after leaving the school found a job as a librarian.

While working in Donbass, Svitlychna had been outraged at the fact that any student in Ukraine could refuse to study Ukrainian and that even a “dvoika” (the usual “fail” grade) in Ukrainian language was a sufficient grade to move up to the next class.

In 1964 Svitlychna settled in Kyiv. She worked in the editorial team of an external agricultural technical college, as the editor of the publishing house “Radyanska shkola”, as a research assistant in the institute of pedagogical studies and at the same time as a teacher in an evening school in Darnytsa.

The “Klub tvorchoyi molodi” [“Club for Creative Young People” (CCY)] which Nadiya visited together with her brother, Ivan SVITLYCHNY, played an enormous role in the life not only of the “Shestydesyatnyky [Sixties activists]”. It was there that she became friendly with many future dissidents, and with the artist A. HORSKA.

0n 1 April 1966 Svitlychna sent a telegram to the Presidium of the XXIII Congress of the Soviet Communist Party in defence of her brother who had been arrested in August 1965. She also sent a statement to judicial consultancy body of the Shevchenkivsky district in Kyiv and the Prosecutor General of the Ukrainian SSR turning down the services of the lawyer appointed to defend her brother, since analogous cases had made it clear that the defence lawyer in political trials was forced to fulfil the role of assistant to the prosecutor.

After the notorious clash on 22 May 1967 near the monument to Taras Shevchenko, the KGB began to closely follow Svitlychna’s movements.

On 8 November 1967 Svitlychna, together with her brother, Ivan DZIUBA and Lina KOSTENKO sent a letter of protest to First Secretary of the Central Committee of the CPU, Shelest, in which they qualified the trial of Viacheslav CHORNOVIL as a violation of basic procedural norms, and as “special revenge, reprisals by those people with power of a person who thinks differently and who has the courage to criticize the actions of specific Soviet institutions, that is, who exercises his constitutional rights”.

In 1968 she was forced under pressure from the KGB to leave the Institute of Pedagogical Studies.

In December 1970 in the city of Vasylkovi, Kyiv region, she and Y. SVERSTYUK found the body of their murdered friend, the artist A. HORSKA, organized the funeral and arranged for a monument to be placed on her grave.

After the “January cull” of 1972 (the second wave of arrests), Svitlychna was summoned to the KGB for questioning virtually on a daily basis in connection with the case against her brother. Each time she parted with her two-year old son Yarema as though for good. Her son was also used by the KGB as an “argument” in the investigation. A month before her actual arrest, during one of the questions, they announced her arrest and demanded that she sign a form stating whom she authorized to bring up her child.

“There were tears. Fear, doubts, bargaining with my soul: should I agree to compromise for the sake of my child”, - these were the thoughts that ran through her head when the head of the investigation unit, the notorious Parkhomenko said: “We are giving you 24 hours – think long and hard”. She did not believe a single word. It then transpired that on that day I. DZIUBA had been arrested, and a large number of searches carried out, including of Svitlychna’s home. They removed the books of V. STUS “Fenomen doby” [“A Penomenon of our time”], A. Avtorkhanov “Technology of power”, Mykhailo OSADCHY “Bilmo” [“Cataract”], a manuscript by Danylo SHUMUK, poems, articles, extracts, letters – 1800 items in all.

Svitlychna was arrested on 18 May 1972. Her son was taken from the crèche by KGB agents and put in a children’s home in the city of Vorzel near Kyiv. It was only through the efforts of Nadiya’s sister-in-law, L. SVITLYCHNA, that the family was able to collect him from there and take him to his grandmother in the Luhansk region.

Svitlychna spent almost a year in the isolation cell of the KGB on Volodymyrska St. She was accused of having held and distributed samizdat. Her response to the provocative questions of the investigator was as follows: “I am simply a person whom life gave the good fortune of meeting with a wide range of creative people. Persecution against them I perceive as persecution against me”.

The investigation protocols also read: “I admit guilt in that, having a higher education and a certain amount of life experience, I still believed laws which contradict each other, I considered that the Constitution of the USSR is the highest Law and this is not the case since it is constantly violated. I promise that when I am released with my small child, I will not read anti-Soviet literature. However I cannot swear that I will not read anything at all, since I am a literate person, while the criteria are not clear, what one can read and what is not allowed”.

On 23-24 May 1973 Nadiya Svitlychna was sentenced by the Kyiv Regional Court under Article 62 Part 1 of the Criminal Code of the UkrSSR (“Anti-Soviet agitation and propaganda”) to 4 years labour camp.

She served her sentence in the Mordovian political labour camp, No. ZhKh-385/3 in the settlement of Barashevo, the Tengushevsk district. .

Together with other prisoners she actively participated in protests, hunger strikes. A month before the end of her sentence, Svitlychna was taken to Luhansk to choose a place to live, effectively in “exile”, although she had firmly decided to return to Kyiv.

She returned in May 1976. She was refused registration, not able to get a job, and threatened with arrest for “parasitism”. She and her son lived with her sister-in-law, L. SVITLYCHNA, who was regularly fined for “infringements of passport regulations”. In autumn 1976 she had the courage to send a declaration to the Central Committee of the Communist Party of Ukraine and the government rejecting her citizenship, basing this move on the savage punishment meted out to Levko LUKYANENKO, Petro GRIGORENKO, Viacheslav CHORNOVIL,Vasyl STUS, Stefaniya SHABATURA and other decent people. She explained her decision with the following words: “It would be below my dignity to remain the citizen of the world’s biggest, most powerful and most developed concentration camp”. She sent copies of this declaration to the Ukrainian Helsinki Group (UHG) and the Presidium of the Supreme Soviet of the USSR.

In 1977 Svitlychna was invited to join the UHG. She refused, explaining: “I do everything I can for you and will continue to do all in my power. I will do it not in order to make myself noticed somewhere as I see no particular sense in this”.

In 1977 she married P. Sktotelny, obtained registration and found work as a janitor in a kindergarten however after the next round of questioning she was dismissed. On 30 December she was presented with a formal warning in accordance with the Decree of the Presidium of the Supreme Soviet from 25.12.1977.

She was called as a witness at the “open” court trial of M. MATUSEVYCH and M. MARYNOVYCH in March 1978 in Vasylkiv, Kyiv region. With regard to her testimony, the Central Committee of the Ukrainian Communist Party was sent the following information from the court: “She attempted to use the court as a platform for anti-Soviet agitation and propaganda”.

On 12 October 1978 she left the country first for Rome where she was given an audience by Pope Paul VI, and on 8 November that year she arrived in the USA. 8 years later she was stripped of her Soviet citizenship.

She worked first as a translator at Harvard University, and then from 1980  was actively involved in the work of the External Representation of the UHG, and was the editor and person in charge of the periodic publications of the Representative Office. All information about repression in Ukraine came to her. Up till 1988 Svitlychna regularly published the “Visnyk represiy v Ukraini” [“Bulletin of repression in Ukraine”] (financed by the Ukrainian Diaspora). From 1983 – 1994 she worked for the Ukrainian editorial office of Radio “Svoboda” [Radio “Liberty”]. At first she only made public broadcasts occasionally, as a rule, in connection with tragic events in Ukraine. She turned down offers of regular work at first, fearing that this could hurt her brother. Then she understood that her brother could not be hurt any more than he had been. Out of a dazzling literary critic and poet the regime had turned her brother into a sick man with first group disability status.

She deciphered and sorted out material smuggled out of the camps and transformed it into brochures and books. She prepared for publishing V. STUS’s “Palympsesty”.

Svitlychna visited Ukraine in 1990, and during the student hunger strike in Kyiv was on the square each day without telling anyway who she was.

Nadiya Svitlychna lived in Irvington (New Jersey, USA) and worked in the Ukrainian Museum in New York, as well as editing the women’s magazine “Vera”. Together with L. SVITLYCHNA she put together a book of recollections of I. SVITLYCHNY.

Nadiya Svitlychna died after a long illness on 8 August 2006. She is buried next to her brother, Ivan Svitlychny at the Baikove Cemetery in Kyiv.