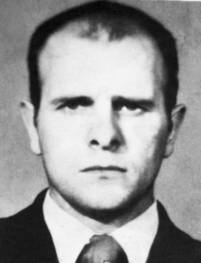 Nationalist, “professional revolutionary”, he spent 27 years and 4 months in captivity, with 24 of these being in prison cells

He was born into a peasant family. He finished 7 grades in his village school, then from 1959 worked at the Zhytomyr furniture plant as a carpenter, while studying at evening school.

Babych was first arrested by the KGB on 13 April 1960 for distributing anti-communist leaflets with a call to the workers not to ask for, but rather to demand their rights, and with the slogan “Down with the communist system of oppression and terror!”. He was tried by the Zhytomyr District Court on 26 May 1960 under Article 7 Part 1 of the Law of the USSR “On criminal responsibility for State crimes” from 25.12.1958 and sentenced to 3 years harsh regime labour camp.

He served his sentence first in the Mordovian political camps, then from September 1962 to April 1963 in the Vladimir prison “for violations of the regime”. The prison regime was extremely harsh, and by the time he was released on 13 April 1963, he had become totally drained and dystrophic.

“In 1962 I already knew that I would not have a family, that I would have no part in continuing the human race. I was not prepared to give birth to slaves. I was a slave. And a slave must not give birth to more slaves – that would be immoral” (From Babych’s memoirs)

A month after his release, he was visited in Rohachiv by Boris Bulbynsky, who had been in one of the same camps as Babych in Mordovia. Bulbynsky told him about an all-Union organization putting out Russian-language leaflets expounding ideas of a new communist revolution and against the restoration of Stalinism. Babych had no intention of joining the organization but decided to help Bulbynsky, hoping for the latter’s help in creating his own, Ukrainian group which would help political prisoners organize escapes in order to continue the struggle. Babych distributed around 1800 leaflets in the Zhytomyr region. Bulbynsky was, however, arrested, and revealed the names of the people who were distributing his leaflets.

Babych was arrested on 27 September 1963. The investigation was run by the Kyiv KGB, but 10 days before the trial, Babych was taken to Rivne. At the court hearing, held behind closed doors from 17-19 February 1964, Babych denied any guilt or any reason to repent, and asked the court to note down that he had become convinced once and for all that Ukrainian nationalism was the right road, for which he was sentenced to 10 years special regime being declared a particularly dangerous repeat offender.

His sentence was served in camp No. 10 in Mordovia. Babych, who had been preparing escape plans, decided to go straight for the “prohibited area” in the evening while a film was being shown. On 14 August 1964 in the work zone, he crawled under the barbed wire some 30 metres away from the soldiers. His absence was only noticed when the prisoners were being taken away from the work zone. He was caught two days later, during the night, in the village of Koperzan near camp No. 17. The commander of the platoon which found him, proved to be from the same village, and therefore Babych was not killed or even beaten. In October 1964 he was sentenced to 3 years deprivation of liberty for his escape attempt.

Instead of lodging an appeal, Babych registered protest that he had been convicted illegally and would therefore try to escape again (the court recorded: “he will try to escape as he is not being held in Ukraine). The Supreme Court of Mordovia changed the sentence to 10 years special regime, beginning from the day of the trial, with 3 years of the sentence being in prison.

During the investigation, Babych tried again to escape from the investigation isolation cell in the settlement of Yavas (Mordovia). The guards discovered his plans and he was flung in a punishment cell for 5 days. At the train station in Vladimir, while they were being put in prison cars, Babych hurled himself between two rows of dazed soldiers under the carriage of an empty train, during which he was wounded in the left thigh. After running about 100 metres, the leg gave in. He was kept in hospital under 22 January 1965. He took no part in the investigation, and at the trial on 19 February he declared that the communists had replaced the term “professional revolutionary” with the new “particularly dangerous repeat offender”. The court sent him for a psychiatric examination to the Serbsky Institute where he was kept from 26 March to 13 May. After the examination, Babych was held in Butyrka in a cell for those on death-row.

The Vladimir Court issued a 3 year prison sentence, this term being absorbed in the ten year period. In January 1968 he was sent from Vladimir to Camp No. 10 in Mordovia.

In 1974, a year before the end of his sentence, he was moved to the harsh regime camp No. 19 (Lesnoye). There Babych took part in the struggle for recognition of political prisoner status, and in 1974 was one of six people who signed the appeal from a group of political prisoners to the Moscow Human Rights Committee, for which he was moved to camp No. 3 in Barashevo.

Four months later, he was taken by special convoy from the punishment isolation cell to Zhytomyr where, on 27 January 1975 at the end of his sentence, he was released.

He returned to his native village of Rohachiv. On 11 June 1976, he was arrested while on his way to Volyn, and taken to the Zhytomyr Police Department. There he was beaten in an attempt to extract a ‘confession’. They told him that somebody called Radchuk had been arrested and was saying that Babych had been his accomplice in stealing weapons (in fact Radchuk had been arrested 6 hours later than Babych). In order to avoid them searching his home (where he had a copy of “Khronika tekushchykh sobytiy” [“Chronicle of Current Events”] (CCE) for which he risked a sentence of 10 years deprivation of liberty and five years exile), he agreed to give evidence, counting on a short sentence. A search was carried out anyway, and “CCE” discovered. The find was recorded in a separate case record however they did not charge him under Article 62 (“Anti-Soviet agitation and propaganda”). Babych was sentenced to 15 years imprisonment: 5 years in prison, and 10 years special regime labour camp under Article 223 (theft of weapons).

From September 1976 he served the prison sentence in the Vinnytsa Prison. After 3 years, with the help of the deputy political education officer, he was moved to a special regime camp in Berdychev, then after 4 months he was transferred to camp No. 60 (Luhansk region), and then to camp No. 96 (Horodyshche, Rivne region). These moves were connected with planned escapes. In Horodyshche the district court (in actual fact, the KGB) moved Babych to Vinnytsa Prison for three years.

At the end of November 1982 Babych’s autobiographical notes (where he had written about the Vladimir prison and the Mordovian political labour camps) were confiscated. In Vinnytsa on 13 December 1983 he was moved to cell No. 4 in a semi-basement – their “press-house”. The guard called out “Receive a thief!” There were 5 people in the cell, and Babych understood that they had been given instructions to beat him up. After the beating, Babych was taken to the punishment cell and the captain said: “Well? I told you, didn’t I, not to write …”

In December 1984 Babych was returned to Horodyshche where he remained until his release.

All of those years Babych had been defended as a prisoner of conscience by Amnesty International.

On 23 May 1989 Babych’s mother died. He asked to be taken to her funeral, but his request was turned down. Two weeks later, on 7 June 1989 Babych was released 8 months before the end of his sentence.

Together with another person from the village of Bazar in the Narodychsk district, Pavlo Esypchuk, he uncovered the burial ground of fighters of the Resistance Army who had died in a battle with the Bolsheviks on 17 November 1921, which had been led by the General-Cornet Yurko Tyutyunyk, and put their graves in order.