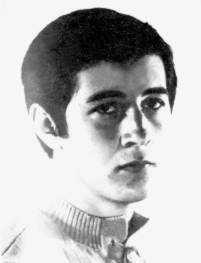 Member of the Ukrainian Helsinki Group (UHG), Activist in the movement of the Evangelical Baptist Christians, human rights activist and former prisoner of conscience

Petro was born into the family of the leader of Evangelical Baptists of Ukraine in Kyiv. His grandfather, the Baptist preacher P.Y. Vins, died in a labour camp in 1943. His grandmother, who was later to be active in the Council of Relatives of Prisoners of Conscience from members of the Church of Evangelical Baptist Christians (EBC), was exiled to Siberia, and from 1964-1967 was herself a prisoner of conscience in the camps. Petro’s father, the Secretary of the Council of Churches of EBC was arrested on several occasions. In 1975 he was sentenced to 5 years labour camp and 5 years exile.

In childhood Petro had several serious operations as a result of which he was removed from the military service register for medical reasons.

At the end of 1976 he and his brother and sisters wrote a letter to US President Carter in defence of their father, G. VINS, who had been arrested in 1974 and sentenced in 1975.

Petro Vins joined the human rights movement representing in the main the interests of religious faiths. On 6 March 1977, following the arrest of M. RUDENKO he became a member of the Ukrainian Helsinki Group (UHG).

On 14 March he was summoned to Donetsk for questioning connected with the case involving M. RUDENKO and O. TYKHY but he refused to go.

The human rights documents which Vins signed during this period include: the letter “In support of Charter-77” (Moscow 12.02.1977); the Appeal “Freedom for Alexander Ginsburg!” (04.02.1977); “Letter No. 2” of the UHG to the governments of the Ukrainian SSR, the USSR and the countries participating in the Helsinki Conference (Kyiv, 1977); an address written together with N. STROKATA to the governments of countries who signed the Final Accords of the Helsinki Conference, to the UN Human Rights Committee, the World Council of Churches, Amnesty International and to all Christians of the world with information about the increase in persecution of Baptists; Statements by the Moscow Helsinki Group (MHG) and the UHG in June 1977 on the case involving M. RUDENKO and O. TYKHY.

On 2 October 1977 Vins was taken to the KGB and warned that if he did not stop his “anti-Soviet activity”, a criminal case would be launched against him. He was soon dismissed “due to staff reductions” from his job as illuminations technician for the House of Culture (cultural centre). He worked as a loader but had to give the job up because of his health. Fruitless efforts to find a job that did not involve hard physical labour prompted him to decide to emigrate.  He began making an application based on an invitation from relatives in Canada.

On 8 December 1977 while trying to travel to Moscow for a rally to mark Human Rights Day, Vins was detained at the station, searched, beaten up and taken to the police station, after which administrative arrest (in custody) was imposed for 15 days for “not obeying the police”.  On 31 December 1977 the MHG came out in defence of Vins with an open letter (Document No. 28).  At the end of his sentence, for refusing to work, the arrest was extended for another 15 days. From 18 – 30 December Vins held a hunger strike.  On 12 December a search was made of Vins flat in which 20 people were involved. They took: from Vins photos of O. Solzhenitsyn and Y. Orlov, and notes for a work on special psychology; from his mother – tapes with recordings of a religious nature and a Bible; from his grandmother – 20 copies of the Bible in a foreign edition and documents of the Council of Relatives of EBC Prisoners of Conscience.

On 6 January 1978, one day before the end of the second term, Vins was released after a protest from the Prosecutor’s office.

On 3 February 1978 he spoke at a press conference to mark the anniversary of the arrest of Alexander Ginsburg.

On 13 February 1978 Vins returned from Yakutia where he had visited his father and had received the latter’s consent, officially witnessed by the camp administration, for Vins to emigrate.  Two days later Vins was arrested on the street “for leading a parasitical way of life”.  On arrest, the documents he had prepared for his emigration were taken away.

On 18 February A. Sakharov and N. Meiman spoke out in Vins’ defence, pointing out that Vins was the eighteenth person from the members of Helsinki Groups to be arrested, and the sixth person arrested during the Belgrade Conference. On 6 April 1978 the People’s Court of the Podolsk district of Kyiv sentenced Vins under Article 214 §1 to one year general regime labour camp.

On 14 May 1978 he was taken to the camp at Rafalivka, Rivne region, where he was brutally beaten and thrown into the punishment isolation cell on several occasions.  On 13 June he declared a hunger strike demanding that he be moved to another camp. It was only after he was released on 21 June from the punishment cell at the instruction of the Regional Prosecutor’s supervision officer, that he suspended the hunger strike.  On 9 September MHG published Document No. 62 09.78 “Inhuman conditions prisoners are subjected to. The lives of Kirill Podrabynek and Petro Vins are in danger”. At the beginning of September Vins was taken to another camp in the village of Perekhrestivka, Romne district of the Sumy region where he was beaten up on arrival.

On 15 February 1979 Vins was released and returned to Kyiv. On 6 and 12 March that year, searches were carried out of his flat.

In the second half of March Vins tried in vain twice to get to the US consulate in Kyiv (which represented Canadian interests also), in order to obtain an invitation from his relatives to enable his emigration to Canada. Unidentified individuals stopped him on the way to the consulate and dragged him by force into a car, beat him up and drove him to a forest. On the third occasion thugs beat him with a truncheon and metal pipe. One of those attacking them had beaten him during the previous attacks. Vins lost consciousness, and the thugs took his bag with the documents for his emigration. Vins’ home was surrounded by KGB agents, no one was allowed in or out and Vins was told he would be killed if he tried to leave.

The campaign in support of the Vins family continued. In April Vins’ father was “expelled” from the country, having been exchanged together with four others for Soviet former employees of the UN who had been accused of spying. On 13 June 1979, the whole family (8 people) flew out to the USA to be reunited with Georgy VINS.