Shevchuk was born into a worker’s family. After finishing school, he graduated from a technical college, becoming a trained builder, but he was unable to work in his profession due to illness – a heart defect. For the same reason he was released from military service.

In Shevchuk’s own words, from his youth he was upset by the regime’s suppression of Ukrainian language and culture. He was always a supporter of Ukrainian independence.

From 1960 Shevchuk published novellas and stories in the national and regional press. In 1962 his work was discussed by a commission for working with young authors of the Union of Writers of Ukraine (UWU).  Shevchuk prepared a collection of novellas for the publishing house “Radyansky pysmennyk” [“Soviet writer”].  Y. SVERSTYUK made the following comments about Shevchuk for the journal “Zmina” [“Change”] № 12 for 1962: “It is particularly pleasant to note that Shevchuk’s works stand out from the works of many professionals in their culture of form, their psychological subtlety and purity of aesthetic tone”.

In 1964 Shevchuk arranged with the Lviv art specialist, B. HORYN, to print samizdat material. Working in the printing press, Shevchuk secretly prepared linotype setting of texts which B. HORYN took to Lviv. The text was then printed in the studio of a Lviv graphic artist. In 1965 B. HORYN was arrested, however the type-setting in Lviv was not found. Shevchuk was still not suspected. However he buried the type-setting for the article “About the trial against Pogruzhalsky" (about the trial in connection with the arson attack on the Central Scientific Library in Kyiv[1]) on a riverbank. Some teenagers came upon it by chance and carried it away, then one of the parents took it .. to the KGB. On 23 May 1966 Shevchuk was arrested. During the investigation he said that he had found the typescript of the article in a library book and had made the setting in order to make a brochure since as a booklover he collected any material about libraries. He held to this story to the end. Then when his connections with Lviv began to come to light, he stopped answering questions.

In October 1966 Shevchuk was sentenced under Article 62 § 1 of the Criminal Code of the Ukrainian SSR (“anti-Soviet agitation and propaganda”) to 5 years labour camp. He served his sentence in the harsh regime labour camps of Dubrovlag (the Mordovian political labour camps). In the camps, in his words, he was part of a nationalist Ukrainian society which was formed from Bandera-supporters[2] and young dissidents. He passed letters out of the camp with descriptions of how life was organized in the camp deliberately in order to achieve constant humiliation and torment of those serving their sentences.  He was thrown into the punishment isolation cell on many occasions. One such letter, smuggled out of camp No. 17, as well as three short stories written in the investigation unit’s isolation cell and excerpts from letters to his brother, were included by V. CHORNOVIL  in his work “Lykho z rozumu” [“Woe from wit”, known abroad as “The Chornovil Papers”] first published in 1968.

After his release in 1971, Shevchuk was held under official surveillance for half a year “as an unreformed individual”.

Throughout the following years he lived under the close scrutiny of the KGB.

During the time when interest towards dissidents, the labour camps and resistance movement began to fall radically, Shevchuk wrote a cycle under the title “Chorny choven nevoli” [“Black boat of captivity”], but thus far he has not been able to get it published.

Shevchuk is a pensioner and lives in Zhytomyr.

[1] The article questioned the official version, suggesting that the act of arson was part of a policy to destroy Ukrainian heritage. It would seem that Pogruzhalsky, the man convicted of the crime was, in fact, employed by the KGB.  (translator’s note)

[2]  Stepan Bandera was leader of the more militant faction of the Organization of Ukrainian Nationalists. (translator’s note) 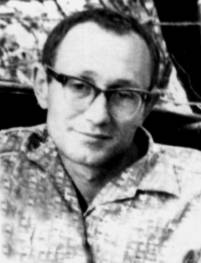