Estonian human rights activist, foreign member of the UHG since 1982. 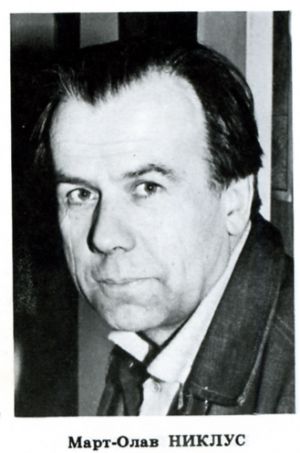 Born into a family of teachers. Went to the Tartu High School.

In 1957, he graduated from the biological faculty of Tartu State University, majored in ornithology. After graduation he worked as a freelance translator for the Estonian State Publishing House.

His political dissidence emerged under his impression of mass deportations in 1948-1949. Later, he took a great interest in photography (Niklus was a winner of the Estonian competition of amateur photographers), he and his friend, student Vello Pällin, photographed old buildings as well as radio signal jammers intended to jam foreign radio stations; his pictures he transferred through foreigners abroad for publication. In addition, in the same way he transferred a letter criticizing Soviet reality to the VoA radio station.

On 15.01.1950, The Supreme Court of the Estonian SSR sentenced Niklus under articles 58-4 (“lending a help to the international bourgeoisie") and 58-10 RSFSR Criminal Code to 10 years of imprisonment and three years of exile; his supporter was given four years.

He did his term in Mordovia political camps and the Vladimir prison (RSFSR).

He returned to Tartu. He was forbidden to pursue his occupation. In 1966-1971, he worked as a driver and vehicle fleet dispatcher, as well as an organ player in the church; in 1968, he taught English, French and German at the courses in foreign languages.

He continued to participate in the resistance movement. He was well acquainted with Moscow dissidents, especially with Natalia Horbanevskaya, who visited Tartu quite often, and Tatiana Velikanova, Malva Landa. He gave them information about events in Estonia and national samizdat intended for the "Chronicle of Current Events" and transfer to the West. He translated into Estonian the Universal UN Declaration of Human Rights. In 1974, he committed to paper his memoirs about his case (Autobiography) published in samizdat.

He was constantly persecuted (searches, interrogations) and arrested by militia and KGB for a short time (October 1976, March 1980). In November 1979, he was fired. On 29.04.1980, Niklus was arrested once again. After reading the indictment, he wrote "A review of the judicial branch” describing the offenses committed. On 08.01.1981, the Supreme Court of ERSR sentenced Niklus under art. 68 h. ERSR CC 2 (corresponding to art. 70 of Part 2 of the Criminal Procedure and Art. 62 p. 2 of the Criminal Code) to 10 years of imprisonment in a particular treatment colony and five years of exile; he was declared a dangerous recidivist. Niklus pleaded not guilty and said that he refused to participate in the trial. Yuri Kukk was sentenced along with him.

He did his term in the camp VS-389/36 in the Village of Kuchino of Chusovaya Region, Perm Oblast (RSFSR). He participated in the hunger strikes and protests, signed individual and collective letters of protest. While in detention in Kuchino together with the members of the Ukrainian Helsinki Group, in particular, Vasyl STUS, L. LUKYANENKO, he joined it as a foreign member together with Lithuanians V.PYATKUS in the most critical time for the Group in order to support it. He was continuously subjected to punishment. On 08.04.1982 he was sentenced to one year staying in one-man cell. In 1983, he was put on the silent system of upkeep for three years; he was kept at the Chistopol prison (RSFSR).

In early July, Niklus came across information in the Estonian newspaper that he had been discharged already. He went on hunger strike and two days later, on 7.8.1988, he was discharged at long last. In 1990, he was fully rehabilitated.

In the spring of 1989, along with the camera crew he visited the abandoned particular treatment camp no. 36 and graves of V. STUS, YU.LYTVYN, I.Mkrtchian; since 1995 he participated in the conferences at the Museum of history of the political repressions "Perm-36".

He took an active part in the restoration of Estonian independence. He is the Honorary Member of the Estonian Group for the promulgation of the Molotov-Ribbentrop Pact, Deputy of the Congress of Estonia and Committee of Estonia (1990-1992).

He was awarded the prize of the Baltic American Freedom League (1988), Estonian (State Emblem, II grade, for his contribution to the liberation of Estonia, 1996) and Lithuanian (Grand Duke Gediminas, III grade, 1999) orders. By Decree of the President of Ukraine of 8.11. 2006 he was awarded the Order “For courage”, 1st grade.

He participated in scientific conferences in Ukraine on the issues of political repression. 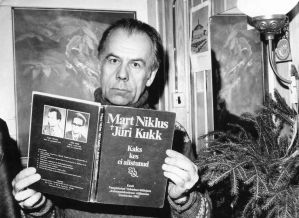