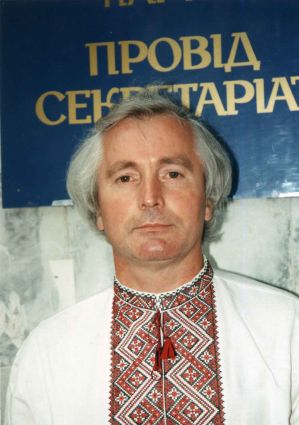 1.  I would like young people to know everything written about the Ukrainian Helsinki Group and the dissident movement.  Specifically:

My article on the Human rights movement in Ukraine, published by KHPG, as well as my two-volume work: Vasyl Ovsiyenko. “Svitlo lyudei [“The Light they gave”].Memories and portraits of Vasyl Stus Yury Lytvyn and Oksana Meshko..

The Ukrainian Helsinki Group. On the thirtieth anniversary of its creation: history, documents.  Edited by O. Zinkevych and V. Ovsiyenko – Kyiv: Smoloskyp, 2006.

The print runs of these books are not large, together coming to five thousand. They need thus to be increased, and also made available on the Internet.  In school textbooks very little is written about the movement and there are mistakes (for example they mix up the Ukrainian Helsinki Group and the Ukrainian Helsinki Union).

2.  “Standing on Maidan” is not selfless commitment and not heroism. It is the normal behaviour of a normal citizen. During Cossack times the normal behaviour for a young man was to join the Sich, in order to defend their country and home from the invaders. In the 1940s the normal action of a young man was to join the Ukrainian Resistance Army (UPA), where, according to Anatoly Rusnachenko’s estimates, the average life expectancy was from one year to eighteen months. In my time, one out of a million (or maybe out of one hundred thousand) went to the Sich (to the labour camps). This seems like heroism only because huge numbers of the population have forgotten what is normal civic behaviour. And that, if you see injustice, fight it.

And there is always a choice. The vast majority always choose the philistine, and not civic, stand of waiting it out in “their house at the end” [i.e. in “I’m alright, Jack” mode]. During the events of “Maidan”, a staggeringly high percentage of people adopted a civic position, and that is cheering. We Ukrainians, despite the total onslaught on our moral values, are not the dregs of this world. One even wanted to believe in Taras Shevchenko’s prophetic words: “Ukraine will rise up and disperse the darkness of bondage and illumine the world of truth”.

3. The term “dissidence” was imposed on us by the West and Soviet propaganda consolidated this. And there’s no way around this. “Dissident” means “person who thinks differently”, i.e. a critic or revisionist of the ruling ideology. For example, Ivan Dziuba who criticized the “incorrect” practice of communism, basing this criticism on its “correct” theory, was a dissident (sincere or not).  Or there was Mykola Rudenko who in the 1960s wrote letters to the Central Committee of the Soviet Communist Party with warnings about mistakes being committed. The widely used term in Soviet propaganda “renegade” (even “pathetic renegade”!) is in principle correct for those who moved away from those whose ideas they formally shared. However in the USSR there were people who never shared the ruling communist ideology, and therefore, were not dissidents. They had their own ideology, for example, the nationalism of Ivan Hel, Zinoviy Krasivsky, the Catholicism of Josif Slipy, the “penitence” [“pokutnytstvo”] of Semyon Skalych. Since in Ukraine from the 1950s to the 1980s there were people with different views opposing the totalitarian occupation regime, I would use the term “resistance movement” about them. This was the term proposed by Valentin Moroz in 1970.

I didn’t hear in the 1960s to 1980s that anyone called themselves dissidents, although at that time whoever you spoke with, almost all of them were disgruntled, almost all had non-communist views, and were therefore “dissidents”. “people who thought differently”. Perhaps the only one who weren’t were the members of the Communist Party of the Soviet Union, i.e. the minority. This was noted by Heliy Snegiryov in his open letters from 1977. In fact it’s unlikely if even Suslov himself was a genuine communist.

I personally began as a dissident since in childhood and adolescence the state imposed its communist views on me. I freed myself of them between the ages of 17 and 24, when I read and circulated samizdat, and was imprisoned for that. My worldview became finally formed n the political labour camps. Since that time I have been a democrat with national consciousness.

5.  The demand that the regime adhere to its own laws is similar to the demand to fully obey the Lord’s Commandments. It is impossible, but one should aspire to it. And it is good that there is God’s Law (or the Constitution) as guiding star to lead the way.

I was not in the epicentre of the Ukrainian Helsinki Group, but it seems to me that the human rights defenders did not have any illusions as to the regime’s readiness for dialogue which would make it possible to openly stand up for human rights with reference to the Helsinki Accords. They knew that they were risking their liberty, and even their life. They were guided however by considerations of a higher nature. Most often it was a question of the fundamental human rights and basic human dignity of specific people that needed to be defended. Yet this was also long-sighted political calculation, to draw the attention of the world community to the situation with human rights in Ukraine and with that behind them to put pressure on the regime in order to achieve the latter’s liberalization, with this widening the field for a further onslaught on the totalitarian colonial system in order to bring about its destruction. It is unlikely that Mykola Rudenko hoped for dialogue with the regime. And Lukyanenko certainly didn’t – for him it was a tactic which presented the chance of legally posing the Ukrainian national issue within the context of the struggle between the democratic West and the totalitarian East. It was a brilliant idea. That the Ukrainian human rights people then oriented themselves on the international political situation was correct and demonstrates that it was this path, combined with the economic depletion of the Soviet Union, with the military and ideological pressure of the West, that led in the final analysis to the collapse of the Russian communist empire and the proclamation of a democratic state in which there is a chance to build a democratic law-based society. There could be no question of this under colonial rule.

6.  I was spurred to resist the Soviet regime by the denigration all around of human and national dignity. And also the lack of prospect in my profession as a Ukrainian language and literature specialist, with the Ukrainian language in the near future doomed to die out like Latin. It was impossible on principle to enter the communist system as a Ukrainian. You needed to become a “Soviet person”, reject your national identity, take on the “great Russian culture”. Generally this “greatness” was reflected in vulgar street obscenities.

7.  Honour and dignity – these were the last bastion which one could not surrender under any circumstances. Or cease to be a person. I would quote Vasyl Stus here: “I had no intention of bowing my head down, whatever happened.  Behind me was Ukraine, my oppressed people, whose honour I had to defend or perish”. (“Z tabornoho zoshyta” [“From the camp notebook”], 1983) I would add that the honour of a people is the dignity of each of us. If the vast majority of the population in their human and national dignity have fallen below zero, than somebody has to take the risk, lay down their life. All the more that I was then a free Cossack, without wife or children. Yes, there was my mother, but she was a Cossack mother.

We heard and knew about support from the western community, although the information was very meagre or distorted. However we were able to “read between the lines”. For example, when the newspaper “Pravda” wrote about “interference in the internal affairs of the USSR”, we knew that this was about us. The knowledge gave some confidence that we were in the right. This “interference” often saved us from arbitrary lawlessness. I our times a prominent person could not simply be “turned into camp dust” as in Stalin’s times. We therefore all tried to provide information about ourselves and close ones to the West.

8.  Everybody is afraid, and those who are not should stop lying. Fear is a natural reaction to danger. Courage is being capable of overcoming your fear. I would like young people to read my texts about Oleksa Tykhy, Vasyl Stus and Oksana Meshko. I consider myself to have been the witness of the spiritual heroic feats of the best people of my time.

9..  I am ready to forgive if they repent. For example, General Volodymr Illich Prystaiko who, together with Professor Yury Shapoval, published two books on the case of the Union for the Liberation of Ukraine (1930) and of Mykhailo Hrushevsky. That was a form of repentance. However I will still always remember that during the search, he twisted the arm of 75-year-old Oksana Yakivna Meshko. And there is no faith in unrepentant sinner General Yevhen Marchuk.

10. Then I most needed freedom of activities and freedom of speech.  If not for the colonial oppression I would have perhaps been a decent teacher, perhaps a principled academic and lecturer. It was possible to push your way into post-graduate studies, but you needed to use subterfuge (for example, joining the Communist Party), and then deceive children and students. And that is a sin. Vasyl Lisovy told me back in 1969 that until the national issue was resolved it would demand all national force. It is still not resolved. We Ukrainians are still in the role of a national minority in Ukraine.

I still believe that the most important freedom is that of freedom of speech. What one can say, one can change. Now we have freedom of speech. Let us use it to the full to tell the truth as much as possible since who knows how long this will last.

Vasyl Ovsienko, member of the Ukrainian Helsinki Group from 18 November 1978. Three times a political prisoner spending 13 and a half years in captivity